*Teams receive a FREE TEAM PRACTICE if 100% of team fees are paid in full, 3 weeks in advance of the season’s start. That’s a $150 value!

We are looking for youth referees for weekends. We will train you before stepping on the field. For more information call Luis Orellana at (510) 427-7662.

Bladium offers youth soccer leagues for players ages 17 years and younger. More advanced teams are recommended to move up an age group. Soccer enthusiasts at all skill levels can enjoy our well-organized indoor arena leagues, with play continuing throughout the year for non-stop fun on three indoor fields!

Our three indoor arena turf fields are ready for play — Three 180′ by 80′ fields with professional Dasher Boards, indoor turf, plenty of spectator seating, and professional scoreboards make Bladium the perfect venue for indoor arena soccer leagues. Our Club Leagues are perfect for all levels of competitive and recreational soccer teams.

Based on the latest announcements from the Alameda County Health Department, the indoor mask mandate has been lifted. We will continue to be in contact with local health officials for the latest updates and will communicate those with you as received.

JOIN A LEAGUE OR TEAM Recreational Leagues are formed for teams looking for an exciting and competitive outdoor and indoor arena soccer experience that is recreational in nature.

House Teams are available at the recreational level for players whose club team is not joining the league.

Want to start a new team? We can help! Just email us using the form at the bottom of this page. Bladium Team Captain and Coach benefits include a complimentary sports membership and endless respect and loyalty from your teammates, players, and parents!

Bladium offers Members and Non-Members the opportunity to reserve a soccer field for their exclusive use for team practice, private pick-up games, or friends simply wanting to get a little extra playing time. Great for youth teams!

Fees
$150 per hour for team practice.

Learn to Play Soccer!
Skills Institute is a skills-intensive program that focuses on the individual technical development of each player. A season in the Institute will improve a player’s technique, control, and skill. All Institute players are exposed to a high level of coaching from our experienced, professional coaches.

Want to play indoor soccer, but don’t have a team? Bladium Sports & Fitness Club can help place your child with our free agent roster! If we get enough players to form a full team for an age group, we will create a Free Agent Team, and get you filled in on all the details with an orientation before your first match! Otherwise, we will try and get you placed with one of our private teams who may need an extra player or two. 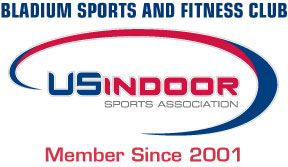