Our mission is to inspire! Lil’ Kickers is an award-winning child development program that uses soccer to help children ages 18 months to 7 years tackle important developmental milestones through age-appropriate and fun-filled activities. We inspire kids to be active, strong, confident, and well-balanced in order to unleash their awesome both on and off the field.

Classes are 50-minutes and are led by highly trained, energetic coaches who engage kids and help maintain their enthusiasm by challenging and encouraging them to learn and accomplish new things – preparing them for school, playdates, team sports, and beyond. More than one million kids have participated in Lil’ Kickers across the country.

In the event of bad weather, all outdoor classes will be moved indoors. Decisions to move classes indoors are at the discretion of Bladium. There will be no make-up classes, refunds, or credits for missed classes. CAN I HAVE A FREE TRIAL? We are currently not offering free trials for the programs.  If you are considering registration, you must register for the entire season (full or prorated) to secure your place in the class.

We are excited to be able to continue to offer these great programs for your children and look forward to seeing you at Bladium. Bunnies classes introduce toddlers to soccer with games that allow them to run, play as a  group and kick a ball. Geared toward a toddler’s unique way of learning, they learn balance and coordination. Thumpers and their parents play organized games together to develop listening skills, balance, cooperation, sharing, ball skills, and foot-eye coordination. Thumpers is the ideal next step for Bunnies veterans who are not yet old enough for the Hoppers level, and a perfect introduction to Lil’ Kickers for new players. Cottontails is designed for children who are ready for more of a challenge than a Thumpers class, but who are not quite ready to be on the field without a parent or caregiver. The Cottontails curriculum is designed to build fundamental skills such as balance, coordination, and ball kicking in addition to helping build a sense of independence. As children progress through the session and become ready for more independence, parents can choose to transition to a less active role in the class. 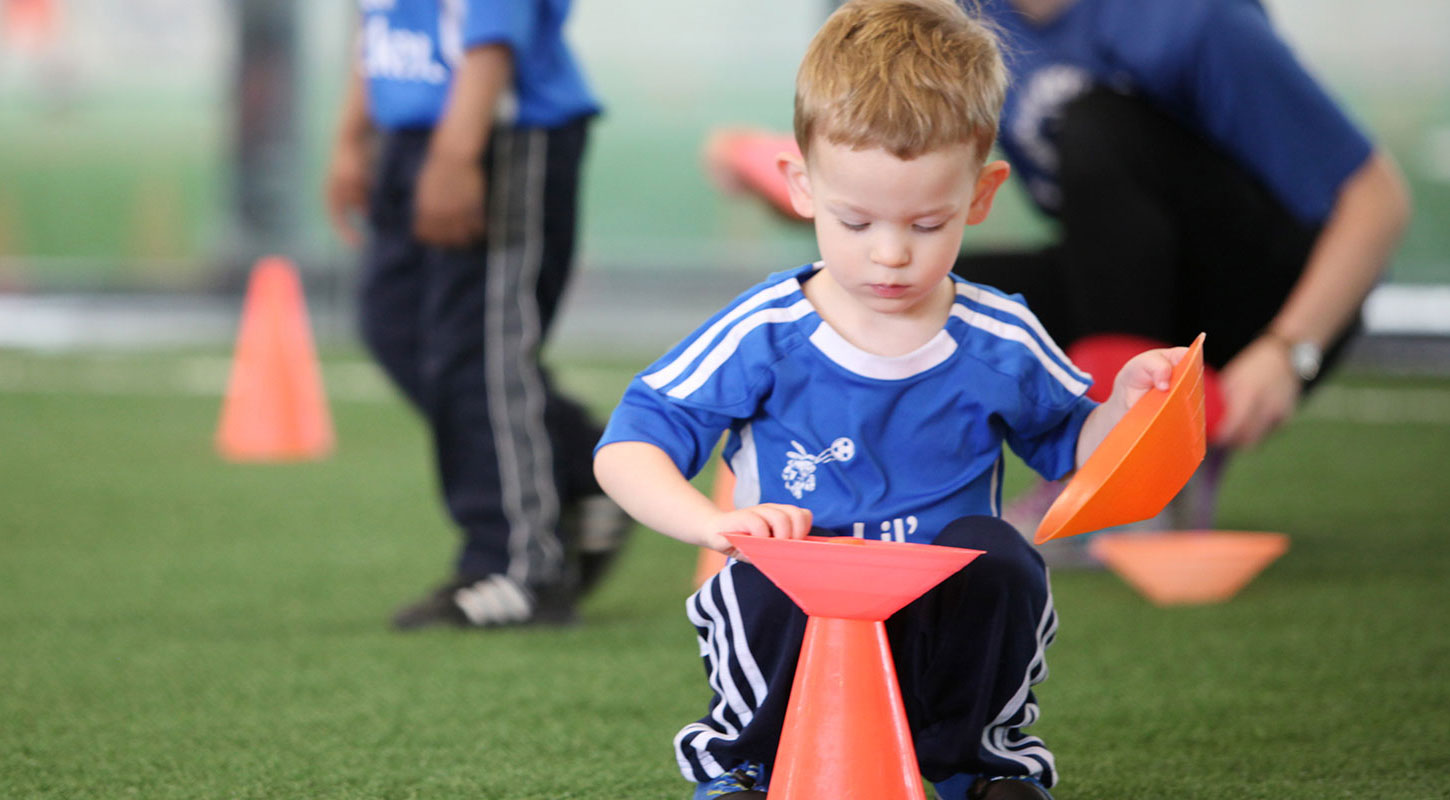 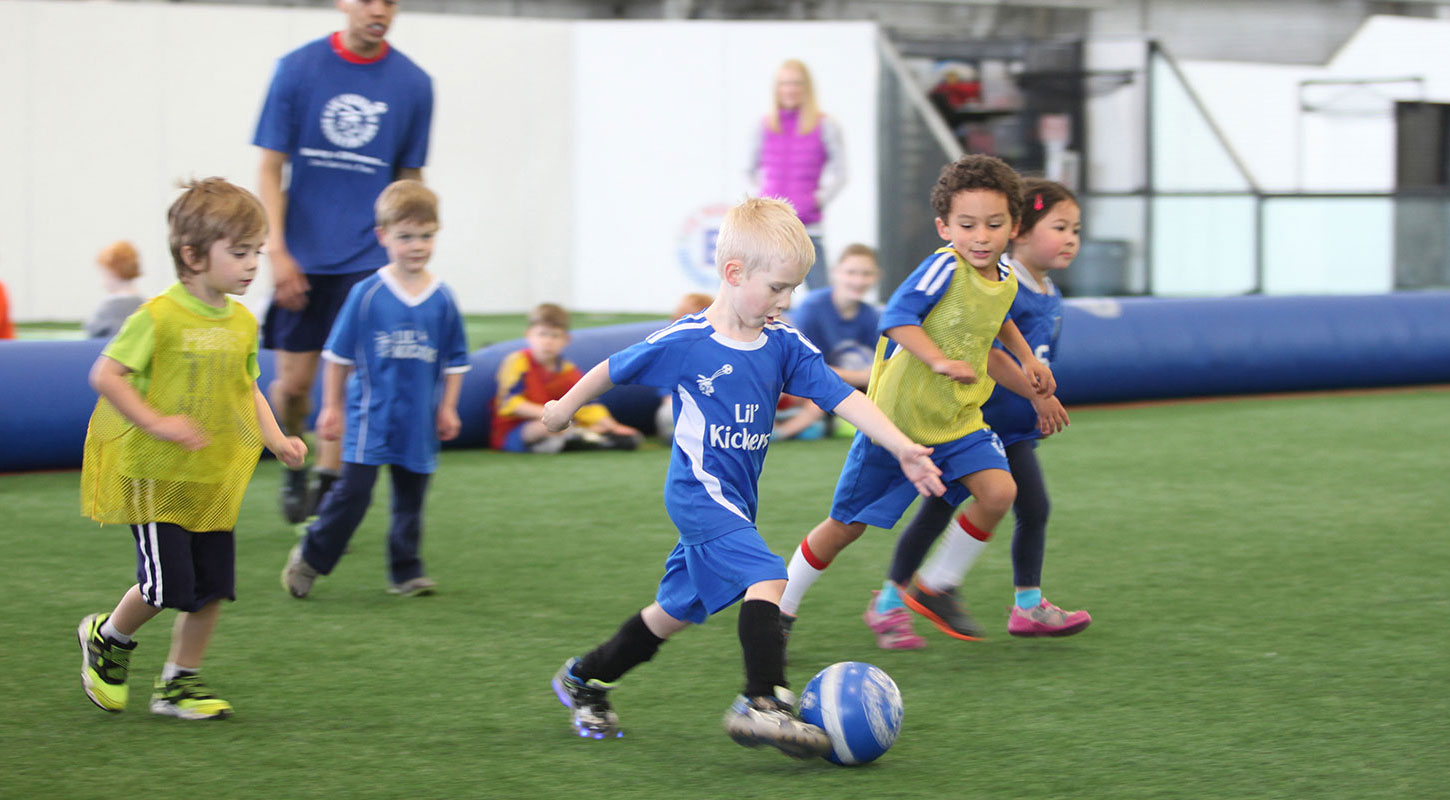 Big Feet classes are for five and six year-olds who have not played a lot of soccer before, or who respond better to a low-key environment. Classes build basic soccer skills (dribbling, passing, trapping, scoring) and develop a sense of confidence on the field. Players will also learn sportsmanship and team play. Some small-sided, yet non-competitive soccer games are played to enhance learning how to apply skills in game situations. Micro Classes are developmental and non-competitive for intermediate players. Proper soccer techniques are progressively introduced and as kids grow and master various skills, they are introduced to more complex soccer skills. Micro Classes are for kids who have played soccer before either in Lil’ Kickers or another program. Take the next step with Skills Institute – a soccer development program. Our players have fun learning and improving technical and tactical soccer skills while tackling key developmental milestones. Learn more.

Can I join a class in the middle of a session?

Yes! We offer open enrollment so that you can join anytime and have your class fees prorated.  This means that you pay only for the remaining class and not the full session fee.

What should my kids wear & bring?

Lil’ Kicker and Skills Institute jerseys are provided with the purchase of the required semi-annual membership fee ($35). Outfitting your child in Lil’ Kickers garb is a fun way to make your child feel part of a team.  Kids naturally appreciate looking like older uniformed kids and role models.  Plus a uniform gives kids a sense of belonging because they look like others on the team.

How many girls and boys are in each class?

Classes are co-ed, so the mix of boys and girls is based on who registers. The curriculum has been modified to allow for social distancing and less contact with equipment and coaches. We maintain a child/coach ratio of 15:1 or less for each class.

If I register my child for a session, are we guaranteed a spot in the next session?

No, all registrations are first come, first serve basis.

What kind of instructors do you have?

All Lil’ Kickers and Skills Institute Coaches are carefully screened to ensure we provide quality, child-centered, high energy instruction. Each Coach goes through a rigorous training process, which includes on-field and curriculum training.

Yes! You can register online any time of the day or night, just click the “REGISTER TODAY!” button at the top of the page.

Can I drop my child off for class?

No, classes are 50 minutes and require a parent or guardian to be on-site. In the event of bad weather and all outdoor classes are moved indoors, spectators will not be allowed indoors except for child/parent classes, and indoor cafe seating and upstairs seating will be closed.

Can I register my child for just one class?

No, but classes are prorated so you can join at any time. There are no free trials. We do not offer any make-up classes, credits, or refunds for missed classes.

What is your policy for allowing children with special needs into your program?

Children with special needs are welcomed in our program as long as we are equipped to assist them accordingly. Please contact our Lil’ Kickers Coordinator or our Skills Institute Manager for more information.

Can we pay as we go during the session?

The entire session must be paid in full at the time of registration. However, since we offer open enrollment, we do prorate class fees when joining after the season has started.

Can I sign up for multiple days a week?

Yes, though you will need to register and pay for the additional class sessions separately.

Can we come on any day?

No, in order to maintain class ratios and consistency within the program, we schedule children for specific times and days. When registering, be sure to first determine which day best suits your schedule.

What if I can't make it to one of my classes?

We do not offer any make-up classes, credits, or refunds for missed classes.

In the event of bad weather, all outdoor classes will be moved indoors. Decisions to move classes indoors are at the discretion of Bladium. There will be no make-up classes, refunds, or credits for missed classes.

Our mission is to inspire! Lil’ Kickers is an award-winning child development program that uses soccer to help children tackle important developmental milestones through age-appropriate and fun-filled activities. We inspire kids to be active, strong, confident, and well-balanced in order to unleash their awesome both on and off the field.

Lil’ Kickers is tailored to how kids learn at different ages – using soccer to help kids tackle key developmental milestones. Every aspect of our curriculum was created by child development experts and our coaches are highly trained to work effectively with kids of all ages. Johvonni has over 15 years of working with youth in the East bay, from running a computer lab in Richmond at the age of 15 for the YMCA to becoming a Recreation specialist, Elementary School Soccer, and Flag Football Coach for the City of San Pablo. To Directing and Coordinating and creating a school and age-appropriate lesson plans for a non-profit Extended Learning Program of up to 100+ kids, for the West Contra Costa Unified School District for multiple schools. He has also run successful Summer School programs at Lake Elementary and Nystrom Elementary. He also has worked as a Lil’ Kickers coach for 8 years, working and has been trained by the owners of the Lil’ Kickers franchise.

He has Volunteered for the YMCA’s Youth and Government Program, that allows high school students to serve in model governments at the local, state, national, and international levels and acting as a chaperone, He has also worked with the group Tech Futures now know as ITA ( Information Technology Academy) working with High School Seniors to integrate core academic classes with the ever-changing technology field. He has also volunteered for the Big Brothers and Big Sisters of America. He has been the participant of the YMCA’s Youth of the Year award in 2004 for the State of California.